Patron Saint – Our Lady of the Way 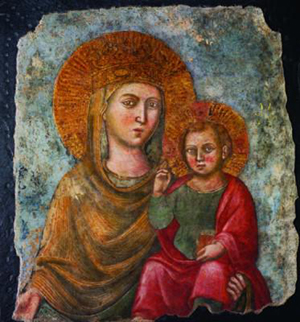 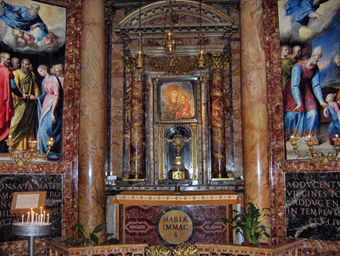 Madonna Della Strada or Santa Maria Della Strada — the Italian for Our Lady of the Way, — is the name of an image of the Blessed Virgin Mary, enshrined at the Church of the Gesu in Rome, mother church of the Society of Jesus – the Jesuits.

The Madonna Della Strada (Our Lady of the Way) is the patroness of the Society of Jesus. Its founder, Ignatius of Loyola, was said to have been protected by the intercession of the Blessed Virgin Mary during battle in his service as a soldier. The name goes back to a shrine established in Rome in the 5th century by the Astalli family, originally known as the Madonna degli Astalli, at a crossroads along the ceremonial route of the popes.

The 13th-14th century fresco (a wall painting done on damp plaster) was originally painted on the wall of Saint Mary of the Way in Rome, the church of the Jesuit priests, given to Saint Ignatius by Pope Paul III in 1540. In 1568, Cardinal Alessandro Farnese erected the Gesu Church of Rome, the mother church of the Jesuits, in place of the former church of Santa Maria della Strada.

The fresco was moved there in 1575 to a side chapel where Jesuits pronounced their vows. Sometime in the 19th century, the image was transferred to canvas and affixed to a slate panel. Altar of Madonna Della Strada (Our Lady of the Way) The icon is located between two altars, the first dedicated to St Ignatius, the second, the main altar of the Church, dedicated to the Holy Name of Jesus.

With St Ignatius of Loyola, St Frances Xavier was a co-founder of the Society of Jesus – the Jesuits, whose patroness is Our lady of the Way. It is not known if when Petrie Parish was established in 1965 it was named because of this relationship but it is quite a fitting bond between our two churches that St Frances Xavier’s patroness was Our Lady of the Way.

Another possible reason for naming the Parish Our Lady of the Way is because Petrie was the first stop for people ‘on their way’ travelling north from Brisbane where horses were changed and passengers rested.